About the Climate Action Initiative

The need for climate action: Ever since the onset of the industrial age, impact of man on the global climate and ecology has been on a scale that could not have been imagined in the preceding ages.
Scientific data shows that the global average temperature has risen by around 1°C since pre-industrial times. The magnitude and pace of warming of global weather, can no longer be attributed to long cycle variations in global climate alone. In fact, the data having been painstakingly gathered ever since 1950s clearly shows that something other than pure natural forces is to be blamed.
And, a simple application of logic reveals that there is only one factor that has changed drastically over this period, and that one factor is human impact on environment. This same conclusion was achieved, when, the vast data, gathered over the last 50 years or so, was used to carry certain statistical examinations through tools such as correlation, regression etc. Each of those statistical tests gave a certain kind of relationship between the global climate change and the various variables thought to be responsible for the same. Among those multitudes of statistical relationships between various variables, one relationship that repeated itself most consistently, was the one that said that there was very high positive correlation between worsening global climate and the rising severity of human activity on the climate.
Subsequently, several more such tests were conducted using other data sets, using ever more powerful supercomputers with staggering computing powers. But, with a few exceptions here and there, that too not very credible, now, almost every climatologist worth his salt, agrees, that it is human footprint, manifesting itself through parameters such as emissions of greenhouse gases (GHGs), aerosols and changes in land use and land cover (LULC), that have substantially altered the equilibrium of the global climate.
Terrifying pieces of evidence in the form of warming of the ocean waters resulting in significant weather anomalies such as frequent heat waves, droughts, heavy precipitation, and severe cyclones, changes in wind patterns (including shifts in the global monsoon systems), warming and acidification of the global oceans, melting of sea ice and glaciers, rising sea levels, and changes in marine and terrestrial ecosystems, is now staring directly into our eyes.
In fact, according to the opinion of substantial majority of climatologists, the rate of change seems to be gathering pace, and, unless urgent measures are implemented, we would be staring at the bleak prospect of staring onto the point of no-return. And, even more alarming is the prospect that if we procrastinate any further, we would probably not be able to do anything to avert the unspeakable human disaster that would be our ultimate undoing.

Available data, and projections based upon the same, indicate that none of the really important factors driving climate change, factors such as global economy, changing consumption patterns, are really going to change in any meaningful way to make any worth-while impact on the global climate. 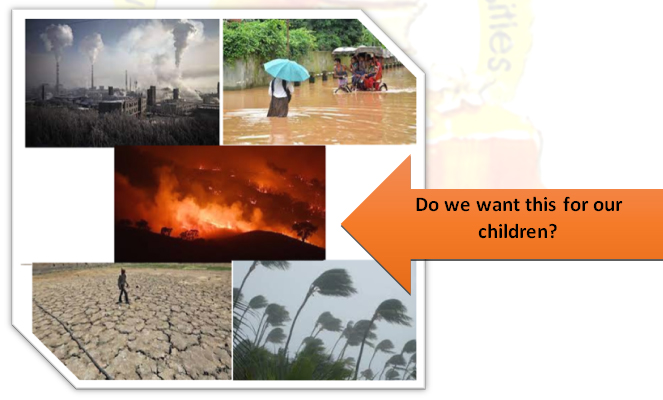 Global climate models developed by experts point at a scenario where we would most likely have a continuation of human-induced climate change during the twenty-first century and beyond. And, projections from these very models show that if meaningful changes are not introduced in a timebound manner to check GHG emissions, the global average temperature is likely to rise within a range of 3° to 5°C, and possibly more, by the end of the twenty-first century.
In the context of the current global ambitions to check human-induced environmental degradation, it must be noted that even if all the targets under commitments such as Paris Accord, Kyoto Protocol etc are met, we would still have to contend with a minimum average jump in temperature of around 3°C by the end of the century. Moreover, this temperature fluctuation will not be uniform across the planet; some regions will most likely suffer more severe warming than the global average. Such large changes in temperature will greatly exacerbate other changes that are already underway in global climate system, such as the changing wind, precipitation and temperature extremes.
Even today, when the global temperature has risen only by a little over 1°C, we can see certain parts of the world being frequently pummelled by ever more destructive cyclones, forest fires, blizzards in some parts and intense heat waves in certain others, irregular rainfall etc. While the whole world is suffering and would suffer even more if the situation worsens. But, it is also true that poorer countries would be the worst sufferers since they would not be able to make investments to create infrastructure to withstand the impending ferocity of nature.
One shudders to think what would happen if currently fertile regions of the world go try and infertile, what would happen if the global food production is not able to keep in pace with the expected rise in global population, where would the vast multitudes of the global poor go, if agriculture, which depends directly upon climate remaining favourable, collapses?

1972 The United Nations Conference on the Human Environment (also known as the Stockholm Conference) was an international conference convened under United Nations auspices held in Stockholm, Sweden from June 5-16, 1972. It was the UN's first major conference on international environmental issues, and marked a turning point in the development of international environmental politics.
1987 Signing of Montreal Protocol. It bound member states to act in the interests of human safety even in the face of scientific uncertainty
1988 Intergovernmental Panel on Climate Change (IPCC) founded under the leadership of Mr. Bert Bolin. It is headquartered at Geneva. UNEP and World Meteorological Organization (WMO) are its parent organizations.
1992 Rio Convention held. The United Nations Conference on Environment and Development (UNCED), also known as the 'Earth Summit', was held in Rio de Janeiro, Brazil, from 3-14 June 1992. This global conference, held on the occasion of the 20th anniversary of the first Human Environment Conference in Stockholm, Sweden, in 1972, brought together political leaders, diplomats, scientists, representatives of the media and non-governmental organizations (NGOs) from 179 countries for a massive effort to focus on the impact of human socio-economic activities on the environment. A 'Global Forum' of NGOs was also held in Rio de Janeiro at the same time, bringing together an unprecedented number of NGO representatives, who presented their own vision of the world's future in relation to the environment and socio-economic development.
1992 Rio earth summit of 1992 saw the birth of the Conference of Parties (CoP) as the supreme decision-making body under UNFPCC. First CoP was held in Bonn in 1995 and ever since it has been meeting on an annual basis at different locations. The COP has met each year since 1995 to review the implementation of the Convention. Each COP elaborates and builds on the decisions and resolutions of previous COPs, with the Kyoto Protocol adopted at COP3 in 1997 being one of the better-known agreements. At COP21 in Paris, “Paris Agreement" was reached and has been widely proclaimed as a historic deal and one that will inevitably lead to decarbonisation. The implementation of the Paris Agreement was to be at the centre of negotiations for COP22 in Marrakech.
1994 The UNFCCC entered into force on 21 March 1994. Today, it has near-universal membership. The 197 countries that have ratified the Convention are called Parties to the Convention. Preventing “dangerous” human interference with the climate system is the ultimate aim of the UNFCCC.
1997 Signing of Kyoto Protocol. The Kyoto Protocol, which was signed in 1997 and ran from 2005 to 2020, was the first implementation of measures under the UNFCCC. The 1st Conference of the Parties (COP-1) decided that the aim of Annex I Parties stabilizing their emissions at 1990 levels by the year 2000 was "not adequate", and further discussions at later conferences led to the Kyoto Protocol in 1997. The Kyoto Protocol established legally binding obligations under international law, for developed countries to reduce their greenhouse gas emissions. The Kyoto Protocol was superseded by the Paris Agreement, which entered into force in 2016.
2016 Signing of the Paris Accord. The Paris Agreement is a legally binding international treaty on climate change. It was adopted by 196 Parties at COP 21 in Paris, on 12 December 2015 and entered into force on 4 November 2016. Its goal is to limit global warming to well below 2, preferably to 1.5 degrees Celsius, compared to pre-industrial levels. To achieve this long-term temperature goal, countries aim to reach global peaking of greenhouse gas emissions as soon as possible to achieve a climate neutral world by mid-century. The Paris Agreement is a landmark in the multilateral climate change process because, for the first time, a binding agreement brings all nations into a common cause to undertake ambitious efforts to combat climate change and adapt to its effects.
2017 United States under the leadership of President Trump decided to withdraw its consent to the Paris Accord. This represented the gravest ever challenge to global climate preservation efforts, ever since the same were set rolling during the Stockholm Conference in 1972. USA, being the richest, most influential country also happens to be the source of largest GHG emissions in the world. Withdrawal of USA was considered a mortal blow to international efforts.
2021 The new US president Mr. Joe Biden decided to bring US back into the fold of Paris Accord, thus effectively reviving the campaign..

It is a property of Inter-University Research Centre (IURC) which is a platform floated by Confederation of Indian Universities (CIU), an apex body of around 1200 universities and university level institutions in India.
The information in this website are meant for the exclusive consumption of people associated with CIU and IURC. If anyone else happens to find this document or any part thereof, the person is requested to immediately get in touch with the office of either CIU or IURC and return the document to our any of our officers.
Unauthorized accessing, publication, whether in part or in full, or sharing & distribution of the contents of this document without the prior approval of IURC, is an offence. The same, if brought to the notice of IURC or CIU, would be considered an infringement of our intellectual property, and the organization would consider itself free to pursue appropriate legal action

Purpose of this Information

This document is not a scholarly writing on the topic of human induced climate change. It is a document that has been prepared with the intention of introducing the idea called Inter-University Research Centre (IURC) which has been floated recently by Confederation of Indian Universities (CIU).
Through this document, an attempt has been made to explain what CIU is and what it does. This document also explains what IURC is and what its relationship with CIU is. This document also contains brief introduction about all that IURC intends to pursue in near future, including what it plans to do for the cause of climate preservation.
Finally, this document should be seen as a call to collaboration, going out from one organization in India to all other like-minded people and organizations all over the world